Welcome to the first monthly newsletter from Lore Link! If you’re receiving this, it means you subscribed to updates on our website, and we are finally starting to deliver! However, before we go any further, we would like you to know that we understand that things change, and this might be something you’re no longer interested in. That’s okay! If you scroll to the bottom of this email, you’ll find the “Unsubscribe” option! If you could please select that instead of just marking us as “Spam,” we would greatly appreciate it!

If you’re hanging with us, thank you!

As development has moved forward, and we get closer to more testing, we wanted to start getting some information out to you all, letting you know what we’re working on, providing some sneak peeks, and letting you know a bit about the team that’s bringing Lore Link to the GM arsenal, and where better to start on this than introducing you all to the mind behind Lore Link, Mark Della-Croce. 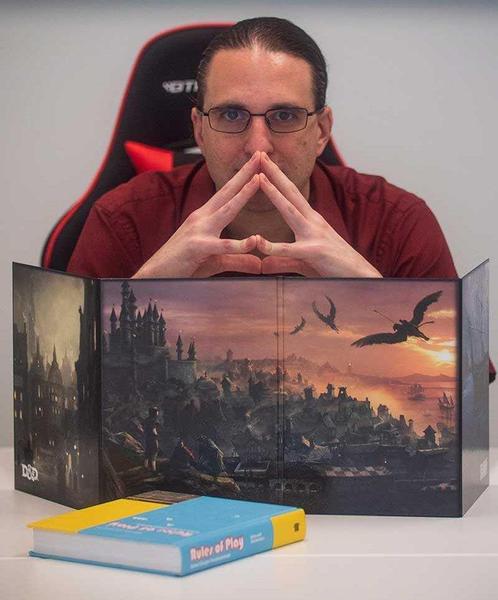 Mark has been involved with tabletop gaming since he was a toddler. He still has the “Dungeon Urchin” shirt his parents made for him after his disruptions inspired a monster in their games! In school, he would tell tales of his tabletop adventures to his classmates, whom he admits were probably really confused. Gaming has helped make him friends in the unfamiliar environment of college, and also in jobs where you get hired not knowing anyone. Through the highs and lows, through epic high-level battles, side-splitting fits of laughter, terror, and tears, he’s played through it all. “It’s been great being able to watch the hobby develop from it being a dirty secret you had to hide from people during the Satanic Panic Eighties to it becoming the world-wide inclusive pop-culture phenomenon it’s become these days,” muses Mark.

Mark dreamed about being able to give back to the hobby that helped him make and build so many friendships, and he thought he was going to be able to chase that dream when he took a game development job. However, that was abruptly derailed by the company’s money problems, which presented him with a choice. Mark told me, “I could take it as a sign that I should just give up on the dreams of building something interesting and creative and just go back to making code widgets at the code widget factory, or I could strike out on my own and develop something that would give back to the gaming community which had given me so much.”

As Mark was pondering his options, he noticed that while digital tabletops, digital rule books, and other player aids were common, there were few good digital tools for the GM. “I saw friends running games, frantically flipping through literal three ring binders full of NPCs, notes, and other documents at game time, trying to find just the right notes. Even as a more ‘tech based’ GM, I still found myself flipping through dozens of web browser tabs, PDFs, and even physical books just to keep up with the energy and creativity I faced at my table.” As he researched further, he also found another issue with many of the digital tools out there. “I also noticed that when researching tools, I found heart-breaking notes from gamers with disabilities about their inability to access even the most basic of digital tools.” This helped cement his decision. He was going to create a digital tool set for all GMs, regardless of their experience or abilities, that would enable them to spend less time focusing on their notes and more time with their players at the table, no matter if it were physical or digital.

However, this was not a task he could take on alone.

While Mark had decades of experience programming, he knew this wasn’t going to be as simple as coding an interface and then throwing it on the web. He would need help designing an interface that not only did what it was supposed to, but was also presented in such a way that it was accessible to everyone. Luckily, one of the friends he made through gaming in college was Michael Dowden, CEO of the Indianapolis, IN based Andromeda Galactic Solutions. Not only was his friend in charge of a web design and development company, but both Michael and Martine Dowden were world-renowned lecturers and award-winning designers in the area of making truly accessible websites. When Mark pitched his idea to Andromeda, Michael immediately saw the potential, and they started working to make Mark’s dream a reality.

While not making any development records, the team has been working hard through the pandemic and other stressors of 2020 and early 2021, and they are getting work done to make this dream a reality.

Next month, we’re going to take a look at the future. What is on the horizon for Lore Link? When are we going to get a Beta release into your hands? When might we get a final release in your hands? While nothing is written in stone (we want to get this done right, after all!), we do have plans and goals, and we’ll start laying that out for you.

Until then, may all your hits be crits!

Mark, along with some of his Andromeda Galactic co-workers, are in The Andromeda Initiative, an Extra Life team raising money for Riley Children’s Hospital. They stream over on Twitch once a month, and Mark has started running them through some one-shot adventures. Their next stream is tonight, September 24th, at 8:00 p.m. Eastern, and we’d love for you to join us at https://www.twitch.tv/andromedagalactic, and help us raise money for these kids!